The Only Way for the Realization of Nibbāna - Pa-AukTawyaSayadaw 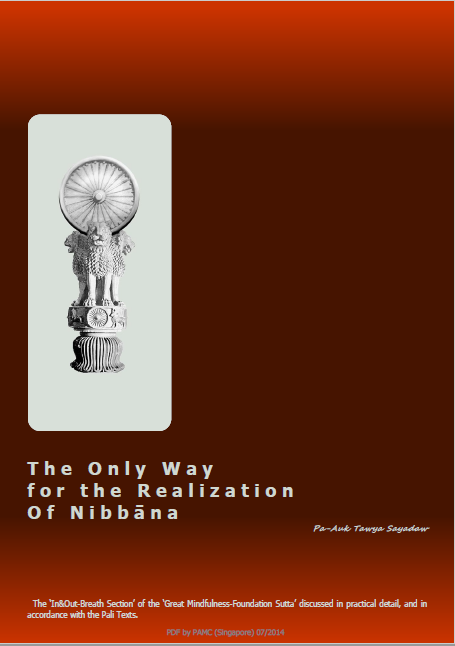 In The Only Way for the Realization of Nibbāna, the Most Venerable Sayadaw gives a brief summary of the practice necessary for such realization, namely samatha and vipassanā. He bases his discussion on the first section of the ‘Mahā∙Sati∙Paṭṭhāṇa Sutta’, the in&out-breath section of ‘The Great Mindfulness-Foundation Sutta’.

In the preface (pp.1-23), the Sayadaw discusses the ‘Mahā∙Sati∙Paṭṭhāṇa Sutta’ within the context of other suttas where The Buddha discusses the practice necessary for realizing Nibbāna. Afterwards, the Sayadaw discusses the in&out-breath section of the sutta within the context of the remaining sections of ‘The Great Mindfulness-Foundation Sutta’. Afterwards, the entire in&out-breath section is quoted (pp.25-26). And there is a brief discussion of how one progresses from mundane samatha and vipassanā to supramundane samatha and vipassanā (p.27).

The Sayadaw then discusses in practical detail The Buddha’s instructions on samatha in the in&out-breath section of the ‘Mahā∙Sati∙Paṭṭhāṇa Sutta’, beginning with Ever mindful he breathes in; ever mindful he breathes out; ending with ‘Tranquillizing the body formation, I shall breathe in ’: thus he trains. ‘Tranquillizing the body formation, I shall breathe out ’: thus he trains; this being the four stages of development for attaining the four jhānas (pp.28-36).

Tables describe the phenomena that make up ultimate materiality (pp.41-45) and mentality (pp.51, 53, 56-59) as described by The Buddha, and their correspondence to the various classifications given by The Buddha in earlier quoted suttas (p.71): the five aggregates (p.72), twelve bases (p.73), eighteen elements (p.74), and four Noble Truths (p.75).
Suppose,