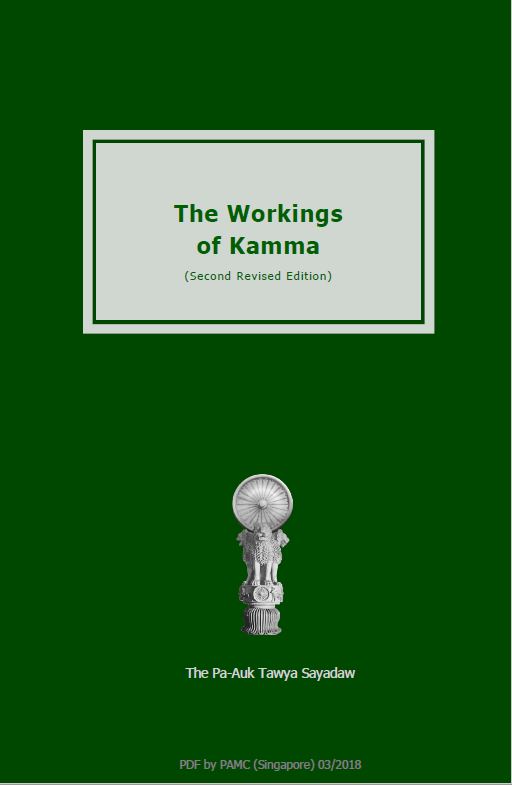 ⇒ Click here to read the book The Workings Of Kamma

Over the years, as he has encountered 'Western Buddhists', meditation
master the Most Venerable Pa-Auk Tawya Sayadaw has seen the need for a
thorough explanation of the workings of kamma in English. To that end he
has composed The Workings of Kamma . It is a detailed analysis and discussion
of the workings of kamma, in accordance with the Pali Texts: Vinaya,
suttas, Abhidhamma, and the authoritative commentaries and subcommentaries.
First, the Most Venerable Sayadaw gives a detailed discussion of how beings
run on from life to life because of a belief in self, founded in craving
and ignorance: he explains how those two factors are prime movers in the
working of kamma.

Next, he gives a comprehensive and practical analysis of the workings of
kamma according to the roots of consciousness. That includes a practical
and systematic analysis of the three merit-work bases: offering, morality,
and meditation. Then, he analyses the ten courses of unwholesome and
wholesome kamma: killing, stealing, sexual misconduct, etc., and nonkilling,
non-stealing, etc. He discusses also the results of kamma: rebirth in
hell, as a ghost, animal, human-, or celestial being. Mundane wholesome
kamma unique to a Buddha's Dispensation he discusses as knowledge and
conduct: necessary for future attainment of Nibbāna. Afterwards, he explains
The Buddha' s twelve categories of kamma: four for time of effect,
four for order of effect, and four for function of effect. And he discusses
how they operate over past, future, and present, and how their workings
depend also on the achievement/failure of a certain rebirth, appearance,
time, and means.

Then comes a lengthy discussion of 'The Small Kamma-Analysis Sutta'.
There The Buddha discusses how kamma accounts for the superiority/ inferiority
of people. Next is a discussion of how a being's kamma 'paints a picture'
of a being, who is in fact nothing more than the five aggregates. And
finally, there is a detailed discussion of the gradual unworking of the potency
of kamma with the insight knowledges leading up to the Stream-
Entry Path Knowledge, etc. up to Arahantship. It ends with a detailed discussion
of the Arahant's Parinibbāna, and what this means in practical
terms.

The Most Venerable Sayadaw gives many examples, with continuous reference
to the Pali Texts. He cites and explains also the dangers of holding
to a wrong view that denies the workings of kamma. And he explains the
necessity for seeing the workings of kamma oneself with direct knowledge,
explaining that one is otherwise unable to understand the Second Noble
Truth: the Noble Truth of the Origin of Suffering.
There is also a detailed analysis of the transition from one life to the next,
and many charts help the reader understand the explanations on the practical
level of consciousness and mental factors.

⇒ Click here to read the book The Workings Of Kamma